Nork is the most hospitable town. The weather is warm and sunny, and the citizens are usually friendly. Visitors can find food, reasonable lodging, and shops. Lucky people have found fortune within Nork itself. Keep in mind though, Nork and it’s Dungeons comprise only a small portion of the land of Drakkar.

Nork is not without its dangers, however. Centuries ago, the people of Nork formed an Elite Guard to protect them from the Evil the Empress had loosed. The Guard was housed in dungeons dating back to an even more ancient time, which formed an almost impenetrable Gordian knot beneath the town. The Guard kept a constant watch, ready to defend the town and pursue attackers at a moment’s notice. A strong and fierce crew, the Guard consisted of the most highly-skilled warriors ever assembled. 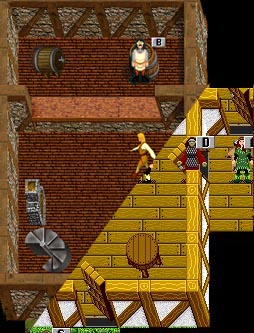 No one knows why the Guard turned against Nork, but soon after the establishment of the Officers’ barracks (where rumor claimed the treasure of the Guard was hidden), the Guard launched a ruthless attack from deep within the labyrinth, slashing their way toward the surface, leaving only destruction in their wake.

Confused and terrified by this unexpected turn of events, the people of Nork called upon all the resources of the Land. The most powerful Mentalists, esteemed Healers, and famous Paladins of the land were called into service. Not forgotten either were the skills of the wily and devious Thieves, or the strength of the untamed Barbarian. Just within the reach of victory, the Guard contingents were forced to retreat to the dark shadows of their tunnels, there to remain a menacing, silent threat.

Fearing another assault, the loyal Norken forces called upon the great Mentalists of the land, led by the mighty Dwarkeneth, skilled in psionic power, to create an unbreakable seal around the Officers barracks and prevent the rebel forces from returning to the surface.

Through the years, the dungeons beneath Nork became home to the myriad evils released by the mighty yet twisted Empress. Orcs, Trolls, Lizardmen and worse, far worse, claim the tunnels of the dungeons as their own, fighting fiercely against any brave enough to venture beneath Nork in search of fame and treasure.

Intrepid adventurers below Nork have recounted tales of strange noises rising up from the sealed barracks, and some claim to have witnessed ghostly apparitions. Many have never returned.