Before Uther surrendered to the evil draw of an almost limitless power, before Chipuda descended into the madness of unbound paranoia, before Breshard’s mind snapped under the strain of the ever-escalating demand to be more and more psionically disciplined, before the nameless Knight became a mere shadow of his former self in his quest for greater power, before all these catastrophes laid low the flower of the Norkken Guard, these Four had banded together to defend the city of Frore from the rapacious attacks of the Snowbeast.

Each adventurer, individually, sought a weapon that would defeat the terrible beast, but before they embarked on the road that would lead to their becoming minions of the Dark Queen, they joined together to venture deep into the Dungeons that honeycombed the land beneath the city of Nork, encountering ever more powerful foes and defeating them each in turn, in the hope of discovering some new weapon or strategy that would enable them to prevail against the Snowbeast. Accompanying the Four champions were 100 of the finest and most brave warriors, psionicists and adventurers recruited from the Lands of Nork, Maeling and Frore. 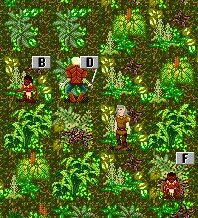 After weeks of grueling battle in which they prevailed against each foe that rose from the depths of the dungeons to confront the group, they came to an iron door which led into a marble-tiled room. In that room the party of 100 plus the Four champions confronted a flickering energy field of some sort. One of the 100 fired an arrow into the shimmering mist which coiled within the field and they were all amazed when the arrow disappeared, as if the mist were a door into another world.

The party camped in that spot for several days while a runner was sent to the King of Frore to ask for his instructions. The runner returned and told that the King had shuddered when told of the energy field and said it was the portal to the fabled land of Cobrahn, from which emanated the essense of evil so powerful that it had corrupted the guardians of Nork and even rivaled the power of the legendary Dark Queen, the Drakkar. The runner told that the King quailed when he learned that the Party had found the portal that he had thought had been sealed forever behind the mystic iron door.

A murmur ran through the Party as they heard the tale unfold. As they watched, the mist rolling inside the shimmering energy of the portal seemed to take on a more menacing cast, as if it were a malevolent presence beckoning, taunting the Party and the Four champions.

Suddenly, Uther stood, cinched the leather straps that bound together his fieldplate, placed the plumed helm on his head and said these words, the last words recorded as coming from Uther before he was corrupted by the power of his dark blade:

“We have come this far on our quest for a weapon or a power that can tame or slay the terrible Snowbeast. We cannot shrink from our duty to pursue that power with which we will protect our homes and our families from the ravages of that great beast. I speak for no one but myself when I say ….. 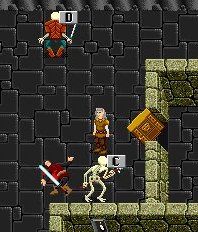 Without another word being spoken, the Party of 100, too, stepped into the crackling energy of the portal, each by each, until the great, marble tiled room was empty save for the guttering flames of their campfires.

Soon the fires burned to embers, the embers died and fell to ash and the ashes were scattered by the skittering feet of vermin that darted across the marble tiles. The flickering portal stood silent, a brooding menace in the echoing vastness of the hall.

No word came from the Party or from the brave champions. The days stretched to weeks, the weeks to months and still no word came. The King became convinced that the same evil had taken them, that same evil that had befallen all those who had ever ventured into the portal. He contacted the ancient and wizened mentalist, Dwarkanath, and commanded him to place wards on the iron door, to seal it forever, lest some reckless adventurer release the boundless evil that lurked in the land beyond the portal.

Then, one day, as Dwarkanath was deep in meditation to bend the last vestiges of his psionic power to forever seal the door, the portal seemed to awaken, the mists to roil and coil, the energy field to spark and crackle and suddenly the Four champions fell through, back into the land of Nork. Dwarkanath was startled out of his trance and his helpers rushed to aid the tattered and bleeding champions.

But the Four had no thought for their own well-being, they were frantic to seal the portal itself, not just the door, but to seal the very portal, to contain the power and evil that they had seen with their eyes and felt in the muscle and bone of their bodies.

Dwarkanath asked the master, Chipuda, what had befallen the Party of 100 and Chipuda only lowered his head and mumbled “All lost. All, all lost! Even my Loriapi!” and at that the great mentalist was overcome. Dwarkanath knew that Loriapi was Chipuda’s protege as well as his love.

Together Chipuda and Dwarkanath toiled to seal the portal. Later, Dwarkanath spoke of the incredible power that Chipuda now possessed. Though the inhabitants of Cobrahn had proved more than a match for even him, his power had increased by at least ten-fold. Dwarkanath shuddered when he thought of the potential of what lay on the other side.

Finally, with a heaving sigh, the very earth itself rose at the bidding of Dwarkanath and Chipuda and sealed the portal in living stone. Chipuda used a portion of his psionic power to inscribe on the stone these words:

“Sealed in here, the flower of Frore, my love, Loriapi”

As he looked at the glowing words of his dedication, Chipuda vowed “As I told you before we fled, one day I will return, this I swear.”

Then he turned and walked away from the marble room.

Dwarkanath warded the iron door as he had been instructed by the King. Then he and the Four champions traveled back up through the dungeons of Nork, toward the city. Dwarkanath was amazed at the ease with which they dispatched foes which had daunted them before. Even the denizens of the Ninth and Tenth levels of the dungeon were no more than a distraction to the Four champions. They retraced the journey which had taken weeks in the company of 100 brave warriors but this time the journey took barely a day.

Once at the surface, the Four champions went their own way. Each sought a separate refuge in the land of Frore. Defeating the Snowbeast and protecting the city were now only vague memories. As the years passed, the lives of adventure and honor that they had led before stepping through the portal to Cobrahn were forgotten. Each pursued, and in the end was consumed, by his own vision of power, a vision that they had first glimpsed in the lands of Cobrahn.

Eventually even Dwarkanath, his studies in the perfection of the psionic arts complete, moved to another plane of existance. The Four champions, though, remained, each a hermit in an isolated refuge, each plotting to acquire power such as they had seen in Cobrahn, each becoming obsessed with that quest. That experience made them all the more vulnerable to the blandishments of the Dark Queen and she easily corrupted them, each in turn. Those who had once been Frore’s protectors, now became her tormentors. Such is the situation today.

The King, though, retained the memory of that fateful day when the portal was first discovered, when the best warriors ever produced in the training grounds of Nork and Frore stepped through to test their mettle and were found wanting.

It is rumored that the King has been awakened often in the last few weeks with nightmares of the portal, of the evils of Cobrahn. It is whispered that he awakens in the middle of the night screaming a name in a tongue that seems alien to all who hear it “Ningizidda!” he cries. “The feathered one! He stirs!” When his advisors question him further, he refuses to speak of it.

Some have begun to whisper that the marbled room has been rediscovered, that Dwarkanath’s wards have been breached, that a few powerful, but misguided mentalists are toiling to remove the stone and earthen barrier from the portal.

The terrors of Cobrahn have been forgotten and generations of adventurers have grown strong and powerful since the portal last flickered with life. Only the Four champions, alone among all the inhabitants of the lands of Nork and Frore, know what awaits behind the portal, and, so far, they have not spoken a single word about it since that day when they fell back into Nork, broken and bloodied by the almost unimiginable power that they had encountered on the other side.